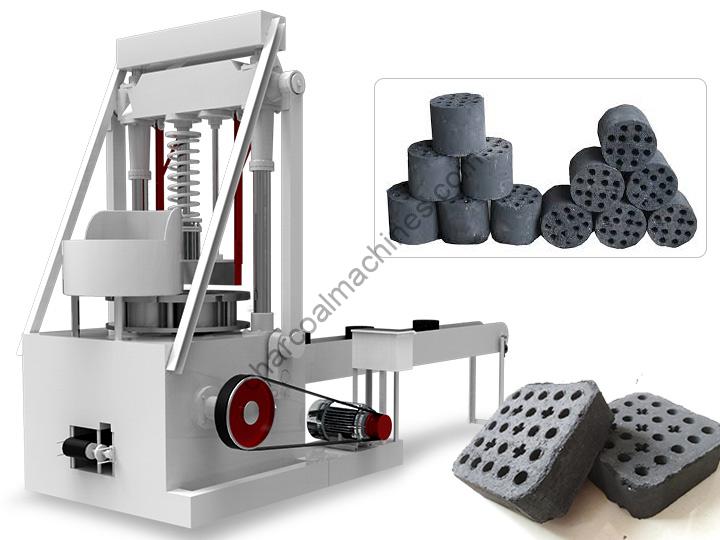 Before briquetting, we may use the charcoal grinder and the binder mixer to process the charcoal powder first. This process can make sure the final charcoal or coal briquettes with high density and smooth appearance for selling at good prices.

The main structure of the honeycomb coal press machine

The conveyor belt of the machine's discharge port can be rotated randomly to convey the formed coal briquettes. The adjustable screws on the conveyor frame of the Honeycomb coal press machine can be used to adjust the tightness of the conveyor belt.

The structure of the honeycomb coal machine is mainly divided into five parts: the body frame, the transmission system, the feeding device, the stamping system, and the conveying device. When the machine is started, the motor of the coal press machine is driven to drive the toothed pulley to rotate and pass to the drive shaft through two gears, and then drive the dial through a pair of bevel gears and the rotating shaft.

The sliding beam is driven by the rotation of the two gears through the pull rod. When the punch goes down, the movable plate moves up, the spring is tightened, and the pulverized coal is pressed into shape. The density and hardness of coal briquettes are determined by the pressure of the spring pressing the movable platen.

Especially the molding part is the most interesting part for it can be changed with different molds for making different shapes of coal briquettes. Adding the powdery material to the machine for stamping, forming, and demoulding, and then we can get the final solid charcoal or coal briquettes.

The charcoal or coal briquettes made by this honeycomb coal machine marked with a number of holes inside the cylinder makes it seems like a honeycomb because it can increase the surface area of the coal briquettes so that they are easy to be ignited and can burn enough.

In the production process, the length and diameter of the coal briquettes can be customized according to the requirements of the customers, and it can be used as a multi-purpose machine, which is convenient and practical.

The honeycomb coal briquette press machine has been improved several times and was once mainly used for household fire, heating, and honeycomb-shaped cylindrical briquettes made of anthracite. In the past, people processed pulverized coal into spheres slightly larger than table tennis.

Now, we make the coal briquettes by the charcoal making machine with holes and different shapes which can increase the surface area of coal, enable coal to burn fully, and reduce resource waste. Most of these charcoal and coal briquettes are used for barbecue, cooking, and home or industry heating.

The honeycomb coal machine has a simple structure and is divided into five parts: a body, a rotation, a feeding, a stamping, and a conveying. The parts work together and the operation is coordinated and stable.